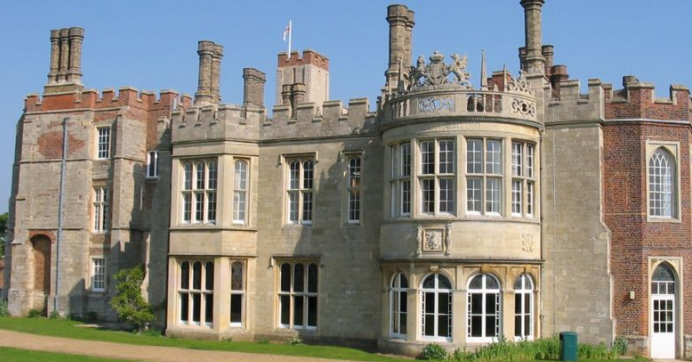 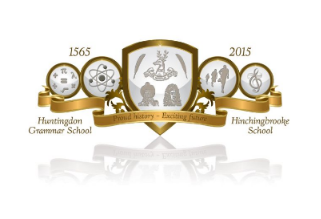 The anniversary of the signing of the school’s lease on 2nd May 1565, which founded the grammar school, was celebrated in Hinchingbrooke House on 2nd and 3rd May 2015 with an exhibition of items from Huntingdon Archive about the history of Hinchingbrooke School/Huntingdon Grammar School provided and manned by Alan Ackroyd and Caroline Clifford from Huntingdon Archives and Library.  Helen Galer and Brampton Flower Club organised a Flower Festival “Education through the ages” which included a silent auction of the beautiful flower arrangements on display.  The weekend also featured an exhibition of artwork by Hinchingbrooke School Students past and present, “Tours and Teas” with student led guided tours of the House and performances by Hinchingbrooke School student music groups, led by staff from the Music Department.

The highlight of the weekend was the Anniversary Lecture by Dame Hilary Mantel DBE.  Demand for tickets to the lecture was so great that a live video link was set up in the Library in order to increase the number of people who could enjoy this special event.

A 450th anniversary commemorative supplement was published in The Hunts Post in April 2015 and contained articles about the school’s history and details of the new history book, Hilary Mantel and the anniversary lecture, the new alumni association, the school website and the new sports hall.

HRH the Duke of Gloucester visited the School on 1st October to mark the 450th anniversary and to unveil a plaque which will be mounted on the new Sports Hall when completed.

Later in October the Hinchingbrooke Alumni Association was launched.  The new association, incorporates the Old Huntingdonians Association  and is open to all former pupils and staff from Huntingdon Grammar School and Hinchinbrooke School.  It is  free to join and  will be run by a committee of current teachers and former OHA members.  The aims are to  maintain the social aspects of the association and develop closer working links between former pupils and the school today, so that current students can benefit from the expertise, experience and contacts of their predecessors.  The association has a new alumni page on the school website which links to “Future First” an online service to help schools keep in touch with former students.

The Foundation of Hinchingbrooke School Special Recognitition Awards ceremony was held in the Performing Arts Centre on 21st October.  The Trustees decided to celebrate the 450th anniversary with awards recognising the achievements of and contribution to the community by young people and of an organisation actively involved in supporting young people within the local community.  It was also an opportunity to promote the Foundation’s bursary programme to which end a wide range of guests from the Foundation’s catchment area were invited and attended including; Rotary club chairmen, county and district councillors, Mayors of Huntingdon and Godmanchester, Chairmen of Parish Councils, Headteachers and Chairmen of Governors of primary schools, St Peters, Spring Common and Huntingdonshire Regional College and the Editor of the Hunts Post.  A number of individual awards were presented to young people aged from 13 to 25 who have completed at least two years in full-time education at secondary schools or colleges in the Huntingdon area and the winner of the community award was Spotlight Productions.

The final Hinchingbrooke Bosendorfer Piano Concert of the year was a gala evening in celebration of the founding of the school in 1565 given by one of Europe’s foremost pianists Katya Apekisheva with a programme which included music by Grieg, Schubert and Chopin.

A concert was held in November at which Huntingdonshire Philharmonic Choir and Orchestra and Hinchingbrooke School music students plus Natalia Williams-Wandoch, pianist, performed music by Handel, Beethoven and Britten at the PAC.  The Hinchingbrooke Suite, composed by Barry Russell former music teacher at Hinchingbrooke School for the opening of the Performing Arts Centre in 1992, was performed in a revised and expanded version to mark the School’s 450th anniversary.

I would like to thank everyone who particpated in or attended this year’s special events to celebrate the school’s anniversary in 2015 and in particular The Foundation of Hinchingbrooke School for the grant they gave to the working group to promote some of the anniversary events and for funding the special recognition awards.

A History book “From Huntingdon Grammar School to Hinchingbrooke School.  The School’s place in History” written by Alan Akeroyd and Caroline Clifford was commissioned and published by the Old Huntingdonians Association in 2014 to celebrate the anniversary and is available to buy from the School’s main Reception desk at £15 a copy.

Published to celebrate the 450th anniversary of Hinchingbrooke School

Books can be purchased from Hinchingbrooke School Reception for £15

Hinchingbrooke Alumni Association is an exciting opportunity for ex-students to find out about their ‘old’ school and to learn of the achievements and activities of fellow students and staff from Huntingdon Grammar School and Hinchingbrooke School.

The Alumni Association also provides a  gateway for Alumni to get involved and become aware of the various events that will be held in the future.

We welcome any Alumni to return and inspire the next generation of students through careers advice and work experience and to provide valuable advice for the next stages of study after Hinchingbrooke School.

Online sign-up link (leavers)
If you are a recent leaver (within last 3 years) of Hinchingbrooke please register with FutureFirst here: https://networks.futurefirst.org.uk/student/hinchingbrooke

By clicking on the names below, you will see posters that showcase our Alumni that we have engaged with FutureFirst

The Old Huntingdonians' Association (founded in 1933) exists to provide former pupils and staff of Huntingdon Grammar School (1565 - 1970) and Hinchingbrooke School (since 1970) with the opportunity to keep in touch with each other and with the school today.

In 2015 the OHA incorporated into the Hinchingbrooke Alumni Association (HAA)