Our penultimate week has been packed with Christmas cheer, with Christmas concerts, festive photos and an array of competitions bringing out the best in our wonderful students and staff.

learning) are awarded a Golden Antler trophy to celebrate their achievements as a form. This week’s winners of the Lower School Golden Antler award are 7V1 and Mr Jago.  7V1 enjoy the challenge of staging the best Golden Antler photo each time they win the trophy, and here they are in true Christmas Spirit!

9M2 (Miss Lewis) have won the Middle School trophy for the eighth time this term!  They have

also been crowned the Golden Antlers Champions for this term, for winning the accolade the most times overall since September. Congratulations to all the students who have contributed to their form’s winning ways and who have demonstrated positive attitudes to learning.

Every week, the House Leaders will collect their team’s House Point totals for the ongoing House Point competition.  Throughout the year, House Points are earned by students in Years 7 to 11.  At the end of each term, the winning House with the most House Points earned, earns the opportunity to fly their flag from the top of Hinchingbrooke House. With only one week to go before breaking up for Christmas, the competition is still very much alive! Which House will see their House flag flying high on Friday 20th?

There has been no change to the order of the House Point table this week, with Pepys House retaining their

position in first place.  The question is, as the gaps between the Houses are closing, can they maintain this position for one more week?

Congratulations to all the students who have contributed to their House’s total this week. Keep up the fantastic effort. It is all to play for to see who has the honour of flying their flag from the top of Hinchingbrooke House on Friday 20 December 2019! 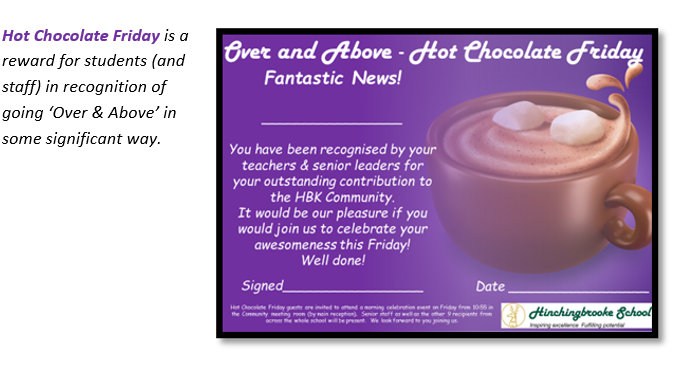 This week, we have celebrated the efforts of our fantastic students who regularly exhibit our HBK.com  values.  They have been highlighted as going ‘Over and Above’ within the school community, running clubs, supporting peers and assisting departments amongst many other things.

Congratulations to these wonderful students, and thank you for their contributions to Hinchingbrooke School this term

Year 7 Form of the Week Winners

Miss Zander’s 7P2 were awarded the title of ‘Year 7 Form of the Week’ in assembly last week. The focus of this competition is attendance.

Well done to everyone who contributed positively towards winning this award. It was a great team effort, so keep up the good work with your great attendance records.

Year 7 students have been nominated by their Form Tutors as a ‘Half Term Hero’, a person who has embraced their first term at Hinchingbrooke School, who has taken the opportunities on offer and has made a significant contribution to their tutor group and lessons.

The winners of this accolade were awarded certificates and prizes in assembly last week.

Congratulations to all of our nominees and winners!

On the evening of Wednesday 11 December 2019 the Music Department performed their annual Christmas Carol Concert and musical performance of The Snowman. It was an evening of fine music performed our School Orchestra, Ukulele Band, Guitar Orchestra and Jazz Band, and wonderful voices of the Pop Choir, Community Choir and Senior Choir.

Earlier in the week, we welcomed over 300 students from 9 different primary schools to watch our school’s performance of The Snowman, narrated by Year 13 student Jess Stewart.

A huge thank you must go to Mrs Cooke, the Music Department and all involved who have given up many hours of their time to make this annual tradition such a special performance during the festive season. Nothing really gets us in the mood for Christmas better than a good Christmas Carol Concert!

Over the past fortnight we have celebrated some wonderful sports performances in boys’ Rugby and girls’ Hockey and Tchoukball.  The Inter-House competitions have been very closely contested throughout the year groups, and there has been fantastic teamwork, resilience and pride on show.

Last week, Mr West in the Science Department organised a STEM competition for our students to represent their House team.  Teams of four were set a problem in which they had to work together to calculate a distance between two points, without being allowed to measure the objects.  This task tested the students’ problem-solving abilities, their methodology and their teamwork skills.

The Hinchingbrooke Year 7 football team travelled to Springwood High School in King’s Lynn for their 5th round tie in the National ESFA Cup. The weather was wet and windy, and the boys knew that the opposition would be just as challenging!

The contest was extremely close throughout, with the Hinchingbrooke boys finally coming away with a 3-4 win, and another game guaranteed in the 6th round.  This means that our boys are now through to the last 32 teams in the country out of 639, something that only Mr Jago and his team a few years ago has managed before.

The 6th round game will be played in the New Year, away against Thorpe St Andrew School, Norwich.  We wish Mr Chilton and his boys the best of luck with their journey towards playing at Wembley!

The Hinchingbrooke Sixth Formers proved that resilience pays off this week as they secured their first win in the league this season.  The boys beat Cambridge Regional College 1-0 in a well fought, competitive game.

For up to date news and photographs about other events this week and in the future, follow us on Twitter @HBK_School.